Organic Phosphorus in the Environment: Solutions for Phosphorus Security (https://op2016.com/)
Session 1: Organic phosphorus flows in the environment in context with other nutrient cycles: Integration across ecosystems

session 070 – Source, speciation, transformation and transport of C, N, and P from terrestrial to freshwater systems

Carbon (C), nitrogen (N), and phosphorus (P) are nutrients often limiting net primary production in aquatic environments. Terrestrial systems are significant sources of these nutrients entering aquatic systems and their nature and availability influence algal biomass production and seasonal dynamics. An understanding of the effects of land management practices on the sources of C, N and P as well as the speciation and transformations of these nutrients in both terrestrial and freshwater systems is critical for controlling the balance of these nutrients in the aquatic environment. The aim of this session is to bring together researchers working on factors affecting speciation and transformation of C, N and P during transport along the terrestrial to freshwater system continuum, including the empirical nutrient signatures and ratios or different source areas and the kinetics of processes transforming nutrient species.

Helle Astrid Kjær from Centre for Ice and Climate (University of Copenhagen) describes how the atmospheric transport of P has changed over time in the following manuscripts:

Abstract: This study used a [13C]DNA stable isotope probing (SIP) technique to elucidate a direct pathway for the translocation of 13C-labeled photoassimilate from maize plants to extraradical mycelium-associated phosphate-solubilizing bacteria (PSB) that mediate the mineralization and turnover of soil organic phosphorus (P) in the hyphosphere. Inoculation with PSB alone did not provide any benefit to maize plants but utilized the added phytate-P to their own advantage, while inoculation withRhizophagus irregularis alone significantly promoted shoot biomass and P content compared with the control. However, compared with both sole inoculation treatments, combined inoculation with PSB and R. irregularis in the hyphosphere enhanced organic P mineralization and increased microbial biomass P in the soil. There was no extra benefit to plant P uptake but the hyphal growth of R. irregularis was reduced, suggesting that PSB benefited from the arbuscular mycorrhizal (AM) fungal mycelium and competed for soil P with the fungus. The combination of T-RFLP (terminal restriction fragment length polymorphism) analysis with a clone library revealed that one of the bacteria that actively assimilated carbon derived from pulse-labeled maize plants was Pseudomonas alcaligenes(Pseudomonadaceae) that was initially inoculated into the hyphosphere soil. These results provide the first in situ demonstration of the pathway underlying the carbon flux from plants to the AM mycelium-associated PSB, and the PSB assimilated the photosynthates exuded by the fungus and promoted mineralization and turnover of organic P in the soil. 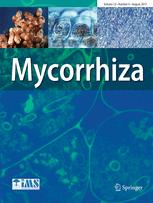 Abstract: The aim of this study was to compare the mycorrhizal responsiveness among old and recent Chinese maize genotypes (released from 1950s to 2008) in low- and high-Olsen-P soils and to identify parameters that would indicate the relationships between the mycorrhizal responsiveness and the functional traits related to P uptake of maize. A greenhouse factorial experiment was conducted. The factors were maize genotype [Huangmaya (HMY), Zhongdan 2 (ZD2), Nongda 108 (ND108), and NE15], inoculation with or without arbuscular mycorrhizal fungi (AMF) (Rhizophagus irregularis), and Olsen-P levels (4, 9, 18, 36, or 60 mg P kg−1). Old and recently released genotypes differed in their response to AMF under low- and high-P supply. Three kinds of responses (in terms of shoot growth) were observed: the response was positive if the soil P content was low, but negative if the soil Olsen-P content was high (HMY and ND108); the response was neutral regardless of soil P content (ZD2); and the response was positive regardless of soil P content (NE15). Principle component (PC) analysis showed that the first PC comprised morphological and physiological traits of maize roots, and the second PC comprised mycorrhizal traits. The opposite was the case, however, in high-P soil. It is concluded that maize breeding selection from 1950s to 2000s is not always against the AM association and that AMF play positive roles in promoting the growth of some maize genotypes in high-P soil. The root length colonization by efficient AMF might be a useful parameter for breeding varieties with increased mycorrhizal responsiveness.

Abstract: Understanding the soil phosphorus (P) cycle is a prerequisite for predicting how environmental changes may influence the dynamics and availability of P in soil. We compiled a database of P fractions sequentially extracted by the Hedley procedure and its modification in 626 unfertilized and uncultivated soils worldwide. With this database, we applied structural equation modeling to test hypothetical soil P transformation models and to quantify the importance of different soil P pools and P transformation pathways in shaping soil P availability at a global scale. Our models revealed that soluble inorganic P (Pi, a readily available P pool) was positively and directly influenced by labile Pi, labile organic P (Po), and primary mineral P, and negatively and directly influenced by secondary mineral P; soluble Pi was not directly influenced by moderately labile Po or occluded P. The overall effect on soluble Pi was greatest for labile Pi followed by the organic P pools, occluded P, and then primary mineral P; the overall influence from secondary mineral P was small. Labile Pi was directly linked to all other soil P pools and was more strongly linked than soluble Pi to labile Po and primary mineral P. Our study highlights the important roles of labile Pi in mediating P transformations and in determining overall P availability in soils throughout the world.

The OP2016 workshop is around the corner and we have 100 delegates registered. We received a substantial number of exceptional abstracts and the OP2016 Steering group has considered all abstracts submitted. The Final OP2016 Programme can now be downloaded.

Session 1: Organic P flows in the environment in context with other nutrient cycles: Integration across ecosystems

Keynote Talk: Historical perspective on the nature and dynamics of organic phosphorus in the environment

Keynote Talk: How are organic carbon and phosphorus mineralization connected in the rhizosphere?

Keynote Talk: Insights into the biological cycle of P (with a little help from oxygen isotopes).

Session 5: Organic P in soil and waters: Stocks, Flows and impact of scale

Keynote Talk: Organic phosphorus and the ecology of tropical forests